What to Stream Right Now ep.2 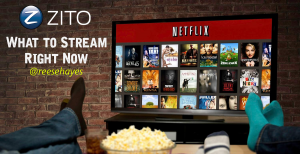 The summer is almost over and once again you’ve found yourself so bored you can’t even pull yourself off the couch to find some food in the fridge. Not to worry! Here are some awesome recommendations for what to stream RIGHT NOW on Netflix!

THE TERMINATOR – Dir. James Cameron (1984)
Save your money and forget about TERMINATOR: GENISYS. If you haven’t already seen the Arnold Schwarzenegger classic sci-fi film, you’re in for a real treat. Chances are you know all about THE TERMINATOR, whether you’re a fan or not, but this movie holds its own today. Of course some of the effects are cheesy and the story might leave a bit to be desired (that’s why there are way too many sequels), but it’s an insanely fun action flick that deserves a viewing or two. This is the film that put TITANIC and AVATAR director, James Cameron, on the map and he’s continued to create classics for three decades since. As far as 80s, sci-fi, action films go, this is the best you can hope for. Shwarzenegger plays The Terminator, a cyborg sent from the future with the task of “terminating” a young woman named Sarah Connor, played by Linda Hamilton. Kyle Reese, played by Michael Biehn, is also sent from the future to protect Sarah. What she doesn’t know is that the person who sent Reese is her future son, the leader of the cyborg resistance. If this sounds intriguing at all, or if you simply want to quote this film with your friends who have most likely already seen it, make sure to check it out. IMDB

What to Stream Right Now

Everyone loves Netflix. The problem is, no one loves spending half an hour searching for a movie or TV show that’s worth your time. Well, look no further, fellow couch potato, because here’s a great movie AND TV show on What to Stream Right Now!

NIGHTCRAWLER – Dir. Dan Gilroy (2014).
Nightcrawler was one of those movies last year that really blew everyone away. No one expected it to be as entertaining as it was, especially from a first time director. That being said, Jake Gyllenhaal steals the show as always. Gyllenhaal plays the disturbingly creepy, Lou Bloom, who’s willing to do whatever it takes to make some money and a name for himself. He finds work roaming the city streets of LA, capturing videos of accidents and crimes to sell to the local news stations. As you would expect, this turns into an odd obsession, leading to Bloom making some rather perturbing decisions in order to further his new career. His chilling character is supported by a great cast including Rene Russo, Bill Paxton, and Riz Ahmed who plays Bloom’s young “assistant”, Rick.
For a film taking place almost entirely at night, Nightcrawler’s cinematographer, Robert Elswit, does an incredible job creating a beautifully eerie image of the Los Angeles landscape that is equally matched by James Newton Howard’s fitting score and Gilroy’s direction of the terrific cast. It might not be the perfect date movie, but if you’re looking for something new and unusual, Nightcrawler might be your best bet. IMDB

Windows 10 is out in the wild. If you haven’t already seen, Microsoft has been advertising it to Windows 7 and 8.1 users using a system tray pop-up. This is a free upgrade, and will probably be a good one for Windows 7 and 8 users alike. Microsoft wants to get all recent Windows machines on the same operating system, providing a standardized Windows platform and pushing the “universal apps” offered by the Windows Store. After the mess of Windows 8, Microsoft appears to have come to their senses and Windows 10 is looking pretty solid.