This was a brilliantly made movie.
Before I get ahead of myself and compliment the whole, entire female led movie for being so great, I would first like to mention that I think that the people behind Wonder Woman were borrowing a few ideas from the current Marvel movies.
We all know the formula for a Marvel movie, throw in some fun characters, have some good fight scenes, funny moments,  character development and BAM, you have a hit! I’m not saying this is a bad formula as it has been proven to work, but, if you thought this would be a heavy serious brooding movie, like a few of the other DC movies, you’d be wrong.

Now onto the praising.
This movie starts off with great main characters, Steve and Diane, played by Chris Pine and Gal Gadot, who respectively play off each other brilliantly. They look out for each other as they go and are a really good pair. Gal Godot plays Wonder Woman “Wonderfully” (Please forgive me for that)! She plays a shining light in an otherwise grey world, not to mention that she kicks some major …butt. I mean seriously, she is basically a one woman army. While talking about kicking butt, the fight scenes were extremely well done. It didn’t even seem far fetched when this beautiful woman would jump through a wall or defeat a room full of Germans without batting an eyelash.

This is 2017, there is a beautiful woman acting in a movie in a skimpy outfit. Obviously you will think the movie is over sexualised to please a male audience. And you would be very wrong. While there is no doubt that Gal Gadot is extremely attractive, this movie does not play on that to keep you inte

rested. You find yourself rooting for this amazing character not because of what she is wearing, but because she is just that, an amazing character.
Now, if you are “wondering” (I really need to stop doing that), why I only gave this great film a 4.5 after that shining review, its because almost nothing can be a 5/5. The movie was great and I’d watch it again, but it can still be improved in certain areas. Should you go see it? Defiantly!

Guardians Of The Galaxy 2 Review

Is it as good as the first? No. Is is still an incredibly fun and visually stunning space adventure film to seal the series fate as this generation’s Star Wars. Yes!

The crass and lovable Guardians return in a more self aware and cartoonish sequel that delivers big laughs and surprising character moments. The cast as a whole has some fantastic chemistry, with each main character dishing up some incredibly memorable moments of snappy comedy (Yondu makes the most quotable line in the movie) as well as some heartfelt moments that balance the adventure nicely. Baby Groot again steals the show and makes us question how many effects had to be added to Vin Diesel’s gruff voice to make it work. The main man himself, Chris Pratt as Starlord, seemed to take a back seat allowing his co-stars to shine.

I’m not as big of a fan of the decidedly more cartoonish humor, as it really feels somewhat bizarre despite how irreverent GotG already is at times. I can appreciate, however, the times when Guardians gets weird with it’s world-building as it still features some of the strangest and creative fiction visually – its neon soaked landscapes and bizarre alien cultures/species make it a feast for the eyes.

The plot revolves around Starlord and the gang meeting Peter’s Dad, discover more about Peter’s past, shake up the ravager fleet, and once again save the galaxy. It’s a decidedly less focused plot as compared to the first, and it has some juicy twists in the latter half (along with some comedy gold as well). It’s also way weirder as compared to the almost grounded original.

And what of the “Awesome Mix Vol. 2” music selection? I didn’t feel that it was as strong and as perfectly integrated into the film as the first, but man are there some excellent picks throughout. The parents that have no interest in comics will appreciate the music when they take their kids.

Guardians of the Galaxy Vol. 2 is a great example of a strong sequel. While not as fresh or as captivating as the original installment, it adds upon the lore of the Guardians, as well as the Marvel Cinematic Universe.

Time For Some Spring Recipes

It’s that time of year again. Winters wrath is starting to wind down into Spring. But its not quite time to completely let go of the warming comfort foods in these inconsistent forecasts. That why I did some digging and found some recipes that capture the best of both seasons. 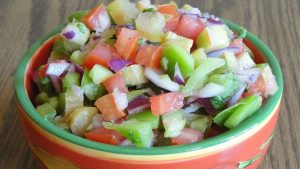 Let’s start with a tangy appetizer that has just enough heat to warm your insides to make the chilly air bearable. I have a love hate relationship with Rhubarb. My mom would make it into pies growing up and after a while I got sick of eating it. But putting it in this Tangy Rhubarb Salsa sounds like a merriment made to be devoured. Give it a go, you will be surprised!

Rolling into the side dish is this Sweet Pea Risotto. When I think spring I think fresh flavors and not much epitomized that like biting into a fresh, sweet, baby pea. This Sweet Pea Risotto does it for me yet still is hearty enough to fill you up and keep you feeling comfortable to go out and shovel that last bit of snowfall off your sidewalk.

Its finally time. The main event! Super fast and easy Maple Dijon Chicken. Maple syrup is a massive part of spring. I remember sitting up late at night down in the sugar shack boiling off sap and turning it into liquid gold. It’s an extremely versatile ingredient that can be used for a lot more than just drizzle over breakfast breads. The only downfall would be that the syrup will cost more than your chicken will. But its worth it!