CES is the world’s gathering place for all those who thrive on the business of consumer technologies.  It has served as the proving ground for innovators and breakthrough technologies for 50 years — the global stage where next-generation innovations are introduced to the marketplace.  Every year, businesses and innovators from around the world meet in Las Vegas to show off their tech.  Here are just a few that caught our eye. 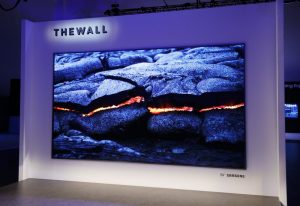 Let’s kick this off with something near and dear to our hearts…. TVs!  Measuring in a massive 146 inches, “The Wall” takes up some serious living room real estate.  Samsung says users can alter the size and shape of “The Wall” so that it can function as a multipurpose display.  In a demo on the showroom floor, the TV displayed what looked like a smaller TV in the center of the screen, while the surrounding area was set to blend in with the wall the TV was mounted on.  And since the TV uses MicroLED technology, it should be able to produce even deeper black tones and potentially infinite contrast.

Razer always seems to bring the intrigue.  This year was no exception, though this year’s centerpiece seems a little more practical.  Project Linda actually takes an idea that’s been previously developed, pairing a smartphone with a shell of a laptop to serve essentially as a dock.  The difference is, they are using their new, rather impressive, and critically acclaimed Android mobile device for the guts.  Not too shabby for an accessories company just a few years ago.

Man’s best robot friend is back.  The new and improved Sony Aibo is more lovable than ever.  With advanced sensors, better AI, and a friendlier design, Aibo can recognize your family, stream video through its nose, nuzzle your hand, and learn its environment. It’s only available in Japan at the moment and costs a hefty $1,800.  Good news is it can’t pee on your carpet!