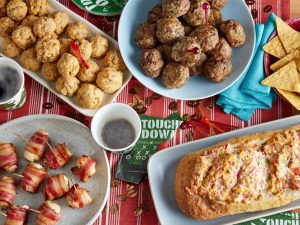 ARE YOU READY FOR SOME FOOTBALL!?  If you’re gearing up to have some people over this Super Bowl Sunday then continue on for some tasty, fun party ideas that will surely impress your guests this year!  It’ll look like you went the extra mile, but will take minimal effort to pull off.

Number 1 Seed Gonzaga held off number 7 seed South Carolina in a 77-73 win in the first game of the 2017 NCAA Final Four semifinals on Saturday, April 1st. Gonzaga built a comfortable lead of 65-51 midway through the second half. South Carolina began pressing and the Gamecocks reeled off 14 unanswered points, tying the game 65-65 and later took the lead after Rakym Felder scored a pair of free throws. Gonzaga finally kicked back into gear when Zach Collins converted a three-point jump shot, leading their team to never trail again. Gaining this win the Bulldogs advanced to their first championship game in the program’s history.

Houston, the Patriots have landed! Just when you thought the Atlanta Falcons would win their very first Super Bowl, Tom Brady and the New England Patriots come back from half time with an incredible performance. History was made at Super Bowl LI for being the first time a Super Bowl game went into overtime. The Patriots were down 28-3, Tom Brady makes a historic comeback rallying 25 points and scoring the two point conversion that tied the game. The Patriots had the ball, and as they had done so many times in Brady’s career, marched down the field going 75 yards in 8 plays and winning on James White’s 2–yard touchdown run. Brady set a new record with 5 Super Bowl wins and 4 MVP’s. Did Tom Brady just cement his legacy as the greatest quarterback of all time??